The Annual CROP Walk is scheduled for Sunday, October 14 from 2:00-5:00 p.m., starting and ending at Grace United Methodist Church at 1900 Boston Boulevard in Lansing.   The route is five kilometers this year.  Members are encouraged to walk, rock, or support those who do through donations and prayer. In addition to raising funds to alleviate hunger, the walk itself draws attention to the problems of hunger and income inequality.

The money gathered by walkers will be used to combat hunger in Lansing, the U. S., and the world. In Lansing, one-fourth of the funds go to agencies such as Advent House and the Garden Project of the Greater Lansing Food Bank.

PCO achieved the largest contribution among Lansing area participating units in 2017— $17,000.  In our 39 years of participating, kids as young as six weeks old, elders over 90, and people in between have participated as walkers and rockers, garnering $312,000 to fight hunger.

At right, 40 of our church’s walker who participated in the Lansing CROP Walk in October, 2015, gathered at the STEM Academy.  Thirty-seven PCO walkers participated in 2017. 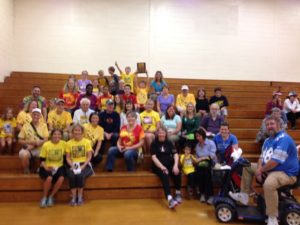 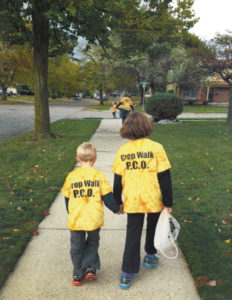 Ron Dorr, honorary marshal of the 2016 Lansing CROP Walk, is surrounded by images of some of the 50-100 the members of the Presbyterian Church of Okemos who have walked and rocked during the last 39 years. 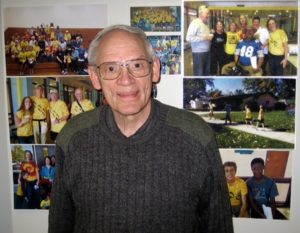 Lunch will be served to walkers around 11:30 a.m. at our church.  Join the walking or rocking this year, or sponsor a walker or rocker!

Search for subject or text: