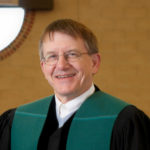 After 40 years in ordained ministry, I confess that I had the arrogance to think I had seen it all. Then this week, the Governor issued a shelter-in-place order, and sent the entire state scurrying into our homes, like so many tombs. I’ve never seen or done anything like this. Walking into this sanctuary, 5 people maintaining 10 feet between us, the space is tomb-like. Even the sound of our voices echo in here, reminding us that the place is empty, that something is missing, and that something is us—the faithful community.

I am constantly surprised by the way the common lectionary manages to assign just the right text for a particular moment in time. So as this pandemic arrived in the United States, we have read about the thirst of the woman at the well which can only be quenched by living water; about blindness that can only be cured by the light of the world; and today, we read about Lazarus, shut up in a tomb and left for dead.

The small town of Bethany is mentioned many times in the New Testament. You can still visit the village, but you can no longer walk on the footpath that Jesus once walked. Today, there is a wall dividing Palestinian territories from Israeli land. Now pilgrims must take a bus from the Damascus Gate at the Old City, pass through a series of check points before disembarking in Bethany. It takes more than an hour to drive today, what took Jesus 30 minutes to walk. At the bus stop in Bethany, pilgrims are greeted by a sign identifying the neighborhood as El-Azariyeh, an Arabic word that recalls the name Lazarus— a name that means, God is my help.

When Jesus learns that his beloved friend, Lazarus, is seriously ill, he does a curious thing; he delays. Instead of running to his side, he stays an extra two days. But notice how Jesus decision to wait is paired with words of how he loved Mary and Martha—how much he loved Lazarus. Whatever else John is telling us by writing the story this way, John is clearly telling us that his delay and absence is also part and parcel with Christ’s love for us.

When Martha hears that Jesus is on his way, she is so angry that she gets up and starts walking up the road that Jesus is traveling on. When she sees him, she is full of recrimination. ‘My brother is dead, and if you had been here, he wouldn’t be.’ She is hurt. Death has hurt her. She has faith in Jesus, her friend, her teacher, a gifted healer. She has faith in God, but her faith in God and her friend is being severely tested.

When Martha goes to synagogue to pray, should would recite the 2nd of the 18 benedictions which are pronounced at the beginning of worship: “Blessed are You, O Lord, for You sustain the living and raise the dead.” Martha is ready to tell Jesus what resurrection means. Jesus has to wrestle the conversation away from her in order to make promises beyond anything she has heard before. Jesus calls himself, “the resurrection and the life.” By this, he means two things: ‘I am the Resurrection, the Victory over the death of the body. Believers, your bodies will be raised. And, I am the Life, the Victory over the death of the soul. Believers, your souls will never die.’ Body and soul are inseparable and Jesus is the one who connects them by the bonds of love.

Even after giving voice to this promise of victory, Jesus asks a simple question: “Where have you put him?” The mourners’ reply, “Lord, come and see.” These are the very words Jesus spoke when calling his disciples, but here it reveals what the mourners believe to be the true end of life—that is, the grave. Jesus responds by acknowledging the pain of death and then to doing something about it.

The price of acting out of love exacts a terrible price, which is why everyone at the tomb—including Jesus—weeps. This is no play acting, where Jesus sheds crocodile tears knowing full well that he is about to call his friend out from the tomb. The deep pain that breaks human hearts, breaks Jesus’ heart too. Death hurts everyone.

What makes death the Lord’s enemy, and fearful for us, is that death separates lovers. Death will take my loves from me and me from them, and that is the final objective of death: terror. For death decrees the emptiness of all human worth, constituted as it is by love.

On this primal level, however, our lives are held in common. Our lives are lived in relationships. Death, sin, and separation are our common experience. Mutuality is the very character of God—Father, Son, and Holy Spirit. Through Christ’s obedience even to death on the cross, the Son has reclaimed us so that we may regard our deaths not as an end, but as a beginning. God, however, does not give us a satisfactory explanation of this phenomena. Instead of an explanation, God gives us His Son.

John uses two verbs to describe Jesus’ activity at the tomb—verbs not used anywhere else in the gospels. Jesus wept, and Jesus shouted. Jesus roars with a great voice: “Lazarus, come out.” What does John mean by this? John would have us know that Jesus the Son—the very Word of God made flesh—feels the heartbreak of death and can, in fact, rouse the dead by the power of that Word. We are meant to recognize that Lazarus is dead in every conceivable way. But God’s Word can awaken anything. And when the dead man comes walking out of the tomb, Lazarus’ friends and family don’t seem to know what to do. So, Jesus tells them: “Unbind him, and let him go.”

In the time I have served as your pastor, I have often referred to the life and work of Dietrich Bonhoeffer, Lutheran pastor and theologian. Considering Lazarus’s story, however, I find fresh importance to Bonhoeffer’s experience, and I beg you to indulge me one last time. In the winter of 1943, Dietrich Bonhoeffer, was arrested by the government of Nazi Germany and put in prison. Bonhoeffer had been an outspoken critic of the German government for a decade, using pulpits in England, in Germany, and across northern Europe to criticize the systematic oppression of Jews and the undermining of the Christian gospel. In 1939, friends brought him to the United States to teach at Union Seminary, out of the reach of the Nazis. But when Germany invaded Czechoslovakia in the summer of 1939, Bonhoeffer made a fateful decision. He boarded the last ocean liner to sail across the Atlantic. Bonhoeffer was convinced that Germany would need good citizens who had lived through the war to rebuild the country after they had lost.

During the war, Bonhoeffer and his brother-in-law worked from within the German government to help Jewish citizens escape, and to aid and abet Germany’s enemy in England. These efforts came to light in the winter of 1943 and when Adolf Hitler survived an attempt on his life, he had Bonhoeffer transferred to a military prison, then to Buchenwald, and finally to Flossenberg Concentration Camp.

Locked up in what was essentially a tomb, Bonhoeffer continued to write and work. He became an unofficial chaplain to his guards and fellow prisoners. From the tomb, Bonhoeffer wrote a memorable piece of poetry.

Who am I? They often tell me I stepped from my cell’s confinement

Calmly, cheerfully, firmly, Like a squire from his country house.

Who am I? They often tell me I used to speak to my warders

Freely and friendly and clearly, as though it were mine to command.

Who am I? They also tell me I bore the days of misfortune

Yet, I also know myself… Restless and longing and sick, like a bird in a cage,

Struggling for breath, as though hands were compressing my throat,

Yearning for colors, for flowers, for the voices of birds,

Thirsting for words of kindness, for neighborliness,

Tossing in expectations of great events, powerlessly trembling for friends at an infinite distance, Weary and empty at praying, at thinking, at making, Faint, and ready to say farewell to it all.

Who am I? This or the Other? Am I one person today and tomorrow another? Am I both at once?  They mock me, these lonely questions of mine. Whoever I am,  You, O God, know: I am Yours!

On April 9, 1945, Bonhoeffer was sentenced to death and hung at the Flossenberg Camp. In two weeks, American forces would liberate the camp; in a month, Germany would surrender.  One of Bonhoeffer’s friends who survived the camp, made it back to England where he told Bishop George Bell of Dietrich’s final words: “This is the end—but for me, it is the beginning of life.”

Jesus raised his friend, Lazarus, from the dead. Many of the Judaeans found reason to believe in Jesus after witnessing the miracle. His enemies, however, found one more reason why Jesus must die, and Lazarus with him. Jesus’ death makes possible a communion that overwhelms the loneliness created by our sinfulness.  Our God has made His home among mortals by assuming our deadly flesh so that we might be friends of Jesus and friends of one another. Such friendship means that we rightly mourn our friends. Yet we can rejoice in the knowledge that the living and the dead share a common reality and a common destination—a city, not made by human hands, the city full of saints and martyrs, the New Jerusalem.

So, who are we, living in this moment, entombed by a pandemic with no end in sight? We are growing accustomed to life in the midst of death counts and dire warnings and apocalyptic fear and panic. So of course, we are often restless and sick, thirsting for words of kindness and acts of neighborliness. We too feel weak and weary, hopeless and helpless. But we are also people who belong to God and we are invited to listen for God’s Word, roaring in our ears, calling us to rise up, and bring with us all in our own city who are struggling to hear a word of hope… to rise up to meet opportunities for service and mission even in this time and place.  We rise up to embody a vision of a church that believes God has made a difference in our lives and will make a difference in the lives of people all around us. Be unbound. Let the  bandages of sin and death fall away, and then go toward our true home with God—Father, Son, and Holy Spirit. Amen.